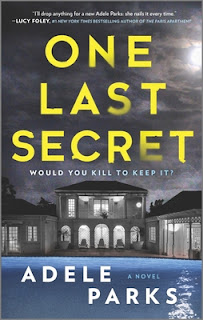 One Last Secret by Adele Parks is a highly recommended psychological thriller.

Dora, a high end escort in London, is careful about the jobs she takes but after a client badly beats her up and she needs recovery time her only friend, Evan, begs her to leave the business and marry him. She accepts and the two appear to be ready to happily settle into a life together, but then Evan is out of town and an old client, Daniel, begs her to accept one last job. The job requires her to travel to the south of France to a luxurious chateau and pretend to be his girlfriend for double her usual rate. She accepts and quickly discovers it was a mistake.

In the opening of the novel as Dora is introducing herself to us and explaining her job as a sex worker it becomes clear that she keeps details about her personal life very private and also that she has a secret. She is an honest character, but not necessarily a likable character. When she is offered the one last job and says yes, even though she no longer needs the money since Evan is rich and gives to her generously, it is, perhaps, the clearest insight into her psyche. It should have been an easy thing to say no to, especially after just recovering from being beaten by a client.

Told through Dora's first person account, the narrative does hold your attention throughout, like a scandalous celebrity story full of a series of incredibly poor choices. Once she is in France most readers will be telling her to turn around and leave right from the start because it is clear that more is going on than we are privy too - yet. There are plenty of twists and a few shocking revelations to grab and hold your attention even while you have to set disbelief aside.

Once the story moves to France, the pace begins to pick up before taking off at a gallop. The big twists and turns begin to start here and only grow in magnitude up to the shocking ending. Although some readers haven't appreciated the narrative jump back in time that explains Dora's secret and what lead her to the escort business, I thought it added a depth that made some of her present day choices easier to understand.

Disclosure: My review copy was courtesy of MIRA Books via Edelweiss.
Posted by Lori L at 11:46 AM