The Thing in the Snow 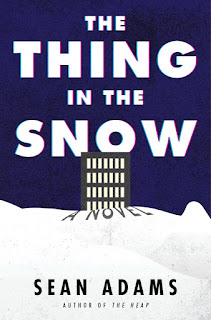 The Thing in the Snow by Sean Adams is a highly recommended novel which is a satirical and psychological examination of the workplace.

The Northern Institute is a seven story research facility in an environment of permanent snow and ice. The researchers have all left the building and three caretakers, Hart, the supervisor, Gibbs, and Cline, and one mysterious researcher, Gilroy, are left in the building. Hart, Gibbs, and Cline do weekly tasks assigned by Kay to keep the building in working order. These are sent to them in a folder along with their weekly supplies which are dropped off via a weekly helicopter. Their weekly tasks are mundane, repetitious assignments, such as checking every door in the building for squeaks, etc, or sit on every chair to ensure its stability.

After opening their day with coffee and light conversation in Hart's office, the three begin their tasks. They usually start with the first floor, the first two floors are buried in the snow, and work their way upwards. Hart embraces his role as the leader, so when Gibbs and Cline bring up the thing in the snow, he isn't thriller about it and finds it an unnecessary distraction. Those two, however, are mesmerized by it. But then it seems that other things might be a bit off in the building. Are the lights really flickering oddly? Is the thing moving?

Hart is the narrator of the novel, so we experience and view everything through his perceptions and point of view. He is also the only developed character. The pace of the novel is slow and plodding throughout, but is surprisingly appealing and humorous, especially if you have ever experienced work place drama and distractions. There are many things that could be "the thing in the snow" at work places.

This novel is a pure satirical and psychological study of isolation, obsession, ineffective bureaucracy, distractions, and meaningless tasks in a work place. The narrative takes, examining isolation, obsession, and paranoia in a mundane, repetitious environment. It is not an action packed horror novel or even especially creepy. It does tackle the toll of monotony and isolation in one's life and can be surprisingly funny at times.

Disclosure: My review copy was courtesy of HarperCollins.
Posted by Lori L at 3:12 PM