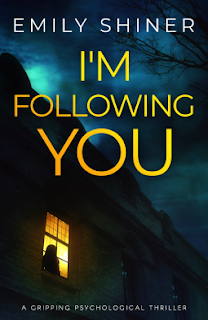 I'm Following You by Emily Shiner is a highly recommended psychological thriller.

Collette has lost her beloved sister Arabella after she was hit by a drunk driver. At a grief support group Collette admits to Jackson, a fellow member, that she is obsessed with the driver who killed her sister. It was reported that the driver, Courtney Barrow, committed suicide, but Collette is sure that Courtney is still alive. Jackson goes with her to walk downtown, looking for Courtney, when they see a woman Collette believes is Courtney. Now she believes Courtney is alive and she has changed her name to Amanda Morgan, Dr. Morgan, so she is still alive and pretending to be a doctor. Collette is obsessed and determined to expose Amanda as a fraud as she stalks her. At the same time Amanda notices a red car that seems to be following her.

This is a fast-paced psychological thriller which requires some suspension of disbelief over several of the details in order to relish the increasingly threatening and unhinged tale of obsession. It's worth overlooking some little niggling details as you follow a woman, Collette, becoming increasingly disturbing, a friend, Jackson, supporting this unhealthy behavior, and a targeted woman, Amanda, wondering why this is happening to her. Chapters alternate between the point-of-view of Collette and Amanda and the obsession unfolds and is reacted to through their perspectives.

Collette and Amanda are both portrayed realistically and are believable characters. Even as she become increasingly irrational, you will understand that Collette is grieving the loss of her sister.  Amanda has also experienced a loss, so both characters are grieving. Neither character is entirely sympathetic, but that doesn't matter in the game of cat and mouse they are involved in. Jackson also seems a very unhelpful friend for Collette right from the start, but he is the friend that she wants.

The ending is a totally surprising and shocking twist which made the entire novel worth it.

Disclosure: My review copy was courtesy of Inkubator Books via NetGalley.
Posted by Lori L at 12:44 AM