A Stranger at the Door 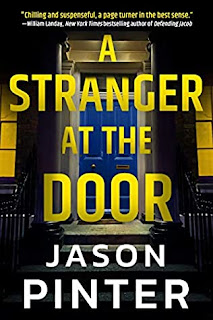 A Stranger at the Door by Jason Pinter is the highly recommended second book in the Rachel Marin series that started with Hide Away (2020).

Rachel Marin received an email from her son's teacher Matthew Linklater on the night he later died in a horrible, painful death manner. In the email he asked her to call him over some concerns he had over some students and their dealings with people who might not have their best interests in mnd. He knew Rachel as the mother of one of his students, but more importantly as someone who has recently successfully worked with the Police Department in Ashby, Ill. as a consultant. Since Rachel is in a relationship with Detective John Serrano, she quickly learned the identity of Linklater. Soon it becomes clear that he may have been concerned about Bennett Brice and his recruitment of at risk teenage boys into his organization YourLife. Things become even more complicated when Rachel's son, 14 year old Eric is recruited into YourLife and a woman from Rachel's past, Evie Boggs, shows up at her door hinting that she should drop the investigation.

The plot is a series of complicated relationships and revelations that seem to increase the threat to Rachel at every turn. She continues to be the same determined, tough, no nonsense woman who says what she means and whose threats should not be taken idly - especially when the welfare and safety of one of her children is involved. While new readers could read this as a stand-alone, it might be best to read Hide Away first. Detectives John Serrano and Leslie Tally return in this novel, although we know more about both of their backgrounds from the first novel. Pinter reveals some more information about Rachel's past, but still not the whole story. I liked the first novel a bit more, but this is still a very good addition to Rachel's overall story. She is still the vigilante protecting others from harm and this time there are a couple of sociopath brothers to look out for.

The chapters are short and the pace is quick, which help keep you glued to the pages to the end. A Stranger at the Door isn't just a page-turning thriller, it also showcases maternal devotion, family bonds, the difficulty of relationships, loyalty, and seeking the truth and justice. The final denouement provides a twist that is heartbreaking, but understandable. You do have to suspend disbelief over Rachel being a consultant for the police with no formal education or background to support this position. I secretly just ignored that detail and accepted she was a vigilante looking out for others.


Disclosure: My review copy was courtesy of Thomas & Mercer.
Posted by Lori L at 7:10 PM