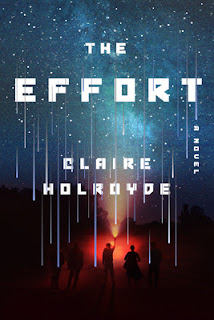 The Effort by Claire Holroyde is a highly recommended apocalyptic tale that starts with an end-of-the-world-by comet scenario and morphs to a novel about human nature.

When the 8 km dark comet UD3 was spotted on a trajectory to hit the Earth one of the first people recruited by the U.N. to help with what will be called The Effort is Benjamin Schwartz, manager of NASA's Center for Near-Earth Object Studies. He and his girlfriend Amy Kowalski are flown to French Guiana in South American to help assemble a team of experts to neutralize the extinction threat. One of the brilliant scientists assisting is China’s Dr. Zhen Liu. The gifted and intelligent UN interpreter Love Mwangi also joins The Effort. The large team is fighting against time and sleep deprivation in order to try and prevent an extinction level event.

At the same time a Coast Guard polar ice breaker is traveling is traveling north right as the comet is discovered. On board is a group of marine biologists, including  Maya Gutiérrez, who are collecting scientific data.. There are two additional passengers invited on the mission. Jack Campbell is a photographer for National Geographic who is tasked with capturing the beauty of the Arctic before it disappears and Gustavo Wayãpi, a Nobel Laureate poet from Brazil who is expected to write about the experience.

The quality of the writing in The Effort is excellent and the novel is well pace to create an increasing sense of tension and danger as the novel progresses. While the pull to read the novel is the end-of-the-world comet, the overwhelming themes become less disaster scenario and more focused on the panic and subsequent breakdown of civilization, as well as the failings of human nature and morality. The novel alternates between following the scientists of The Effort in French Guiana, the other notable main characters, and a myriad of other minor characters. Naturally, the character development was slightly lacking simply because of the sheer number of characters and the limited pages. The Effort almost needed another hundred plus pages to fully develop the characters and follow all their story arcs to the end. Thankfully we do get to follow several characters into the future, but, alas, not all of them which I would have preferred.

Everyone loves a good disaster novel and The Effort fits the bill. There were a few little niggling details that detracted from an otherwise excellent novel. Holroyde didn't stop herself from including little details, personal opinions, and comments in the narrative that point to the novel being penned in 2018-19. It's always better to leave very current political controversies out of a novel in order to give it some longevity, especially in light of a subsequent pandemic hitting before publication. I have enjoyed many apocalyptic novels over the years and most of them I could easily reread and note that only technological advancements date them to being penned years or decades earlier. (My review copy was downloaded at the beginning of June.) There were also a few characters that we didn't get some closure on and the focus of the narrative sort of switched mid-novel and became more social commentary. But, these were little qualms that most people will easily overlook.

Disclosure: My review copy was courtesy of Grand Central Publishing