The Future Is Yours

The Future Is Yours by Dan Frey
2/9/21; 352 pages
Random House Publishing Group 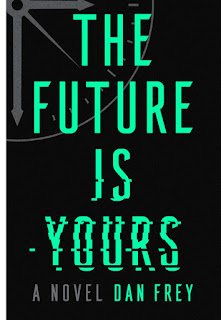 The Future Is Yours by Dan Frey is a highly recommended tech thriller that explores the realm of time travel and the relationship between two entrepreneurs.

Adhi Chaudry is by all accounts a genius (and on the spectrum) and Ben Boyce has been his best friend since college. Adhi has the theory that a quantum computer can be made that will see into the future. Ben believes in his friend and the two join together to create a startup to deliver the device, The Future. Adhi's job is to develop the technology, while Ben will hustle up the funding. And they do it. They create a prototype computer that can see one year into the future, and the future they glimpse looks bright. Ben is ready to be Silicon Valley's next tech billionaire, while Adhi begins to see changes in the future and becomes concerned.

The narrative in The Future Is Yours is told through written records, mainly a transcript of Ben's testimony before a congressional committee, but also text messages, emails, and blog posts. This epistolary technique works well in the novel as you need to read in-between the lines and infer what may be going on behind the scene that is not being shared. The sci-fi elements of being able to see one year in the future is very intriguing, but The Future Is Yours focuses more on the past and present relationship between the characters and the implications of the technology. (The concept of time travel paradoxes is introduced in a simple manner, especially the effect on free will as in Newcomb's paradox.)

The characters are developed through their own words and actions. It becomes clear that Ben is focused on the wealth and prestige he plans to amass from The Future. Adhi clearly has a conscious and begins to question the moral and personal implications of looking ahead a year in the future and how this alters individual actions and thoughts.

This is a fast read and will hold your attention throughout. The novel does focus more on the human aspect of the story and the relationship between Adhi and Ben rather than the science behind time travel, or in this case glimpsing information from the future. I was fascinated with the idea of seeing information from one year in the future, but also questioned the implications of this information and Adhi does do this even though The Future is his technological invention. Personally, I would have liked to see the paradoxes explored a little more. Ben is all about "show me the money" and becomes increasingly reprehensible as you see he will do anything to see that big payout. This makes The Future Is Yours an interesting psychological and moralistic study of the friendship between two very different men.