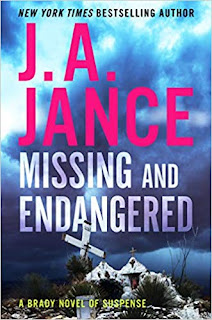 Missing and Endangered by J. A. Jance is a highly recommended procedural and the nineteenth installment of the series featuring Joanna Brady.

Joanna Brady, the sheriff of Cochise County, Arizona, has one of her officers, Deputy Armando Ruiz, shot while he was trying to serve a no-contact order to Leon Hogan. Hogan is shot so an investigation into the shooting begins even while Ruiz is rushed into surgery. Joanna has a feeling that more is involved in the case than what is initially evident, and she fears for the two young children who were on the scene along with Hogan's soon-to-be ex-wife. At the same time Joanna's daughter, Jennifer is at Northern Arizona University for her sophomore year. She is going to bring home for Christmas vacation her roommate Beth Rankin, who has a relationship with her parents. Joanna and her husband Butch Dixon also have two younger children.

While Joanna is closely following the Hogan case as much as she can, Jennifer is increasingly concerned about Beth, who is involved with her first boyfriend via late-night phone calls. She met him online and is clearly besot with him. The problem is that she was sheltered from real life and is incredibly naive. It becomes clear that Beth is in trouble, which opens up a whole other set of concerns.

This is actually my first Joanna Brady novel and I liked it. It is a comfortable procedural that follows a predictable formula. That isn't implying that it is not compelling, it is. The plot is well paced and the two different story lines will hold your attention throughout the novel. Joanna juggles a busy home life with a busy career and does her best to do everything she can to manage both. It must also be said that she has some help to handle her home life.

Obviously, character development has occurred over many previous novels, so, although it was adequate here, those who are following the series won't need more and will like the new developments. There was enough background provided to easily understand the character's backstory and history. I'm certain fans of the series will love this latest novel and for those new to the series it can be read as a stand-alone novel. (I wasn't particularity thrilled with yet another negative portrayal of homeschooling. Get over your prejudice. It works - and surely we've moved past this now, especially in light of the many options currently available and the many parents being thrust into the role of teacher without a lot of preparation in 2020.)

Disclosure: My review copy was courtesy of HarperCollins.
Posted by Lori L at 1:38 PM