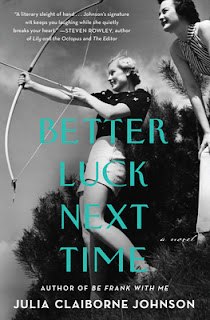 Better Luck Next Time by Julia Claiborne Johnson is a highly recommended appealing, comedic novel set in Reno, Nevada in 1938.

If wealthy women wanted a quick divorce, Reno, NV, was the answer. As the self proclaimed “divorce capital of the world" women were required to live in the state for six weeks to establish residency and then they could be granted a divorce. The Flying Leap dude Ranch catered to women who needed a place to stay while waiting those six weeks. Ward Bennett, 24 (almost 25), has been working as a cowboy on the ranch where he chauffeurs the women into town or to and from the airport, takes them on trail rides, and helps serve them meals. A good looking young man, he is there as eye candy and to offer the women a listening ear and supportive attitude. His employers and the clients have no idea he actually came from a privileged background in Tennessee and attended Yale for a year, but his family fell on hard times and lost everything in the Great Depression. When Emily, who drove herself to the ranch from San Francisco, and Nina, who is there for her third divorce arrive and become roommates, the two become inseparable friends and rope Ward into acting as their personal assistant, driver, and participating in some of their antics.

The story is told by Ward in 1988.  Dr. Howard Stovall Bennett III (Ward) is now retired and living in a retirement home. When he is asked to identify himself and others from a picture at the Flying Leap, he consents to having the anonymous interviewer record the conversation and thus the story begins of that six weeks in 1938 when Emily and Nina were at the ranch. Of course, life is complicated and a stay at the Flying Leap was an emotional time for the guests but Emily and Nina were memorable. I utterly enjoyed the story presentation as a first person recorded narrative by Ward looking back over time. It allows us to see the events that happened fifty years ago through his perspective and experiences. Ward is a keen observer and honest storyteller as he relates the events in 1938 but also tells stories of this life in the fifty years after that. He is an extremely likeable, charming character. The women were less genial characters as they all tended to be self-centered and self-absorbed, but they are at the center of the impulsive adventures instigated by Nina.

I enjoyed the writing immensely and flew through the pages of Better Luck Next Time. The novel is well-paced and the plot is well-executed. After living in Reno for years, I completely understood the setting and the descriptions so the novel took on a life for me quickly. The story takes a more poignant turn as it progresses and Portia, Emily's daughter shows up. Ward is a well-developed character and we know some of what makes Emily and Nina tick, but since this is through Ward's eyes, they are enigmas at times. The ending was absolutely poignant, touching, and heartbreaking while still providing a measure of hopefulness.

Disclosure: My review copy was courtesy of Custom House/HarperCollins via Library Thing
Posted by Lori L at 12:40 PM