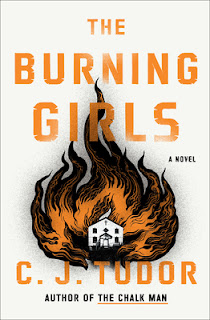 The Burning Girls by C. J. Tudor is a highly recommended psychological thriller packed with plenty of bait and switch clues.

Reverend Jack Brooks, a widow with a fourteen-year-old daughter, Flo, has been ordered to leave Nottingham and go to to fill a sudden vacancy in the village of Chapel Croft as an interim vicar. The Sussex village has a dark history as the site where Protestant martyrs were betrayed and burned five hundred years ago. There is a local tradition of making dolls out of twigs, which are called burning girls, and leaving them on the church grounds. The ominous atmosphere in the village continues as thirty years ago two teenage girls disappeared and the previous vicar hanged himself in the church. When Jack arrives she is left a welcome package of an exorcism kit with a warning note.

The village is as glum and the atmosphere is as foreboding as the history portends. The cottage they move into is dilapidated, dark, and dank. The town is hardly a relaxing village vicarage post. It is full of strange sometimes hostile characters, horrible secrets covering centuries, odd occurrences, and it becomes increasingly menacing. As Jack begins to meet people and learn more about the village, Flo also meets the locals while out taking photographs, including Lucas Wrigley, a teen with dystonia who's bullied by the others, and two of the teens who bully him.

The plot is perfectly paced in this taut nerve-racking suspense. Tudor does an excellent job slowly upping the suspense, introducing one more clue, another odd occurrence, a further piece of history, a new twist, all while moving her characters through the plot as the tone of the narrative becomes increasingly strained, uneasy, and ultimately dangerous. The increasing tension will keep you glued to the pages trying to follow the clues to figure out who is trustworthy and what is really happening in this creepy village. The threat is real, but where is it coming from? Once you hit the last third of the novel you will not be able to put it down and the scenes leading up to the final denouement will actually surprise you.

The narrative alternates between the point of view of Jack and Flo, which works very well in this novel. The two keep many incidents and information they come across to themselves rather than telling each other everything, or at least some of the more egregious events that occur. This helps increase the tension and sense of foreboding as the novel progresses.

While this is a remarkable psychological thriller, for me the enjoyment of the suspense was marred by the fact that I didn't enjoy the character of Jack and this never really slackened throughout the novel. Flo is a perfectly developed teenager and I liked her character, but Jack kept saying things that were off-putting to me. The two have a believable relationship, although there were some things that seemed unlikely, like Jack not telling Flo about her family background.