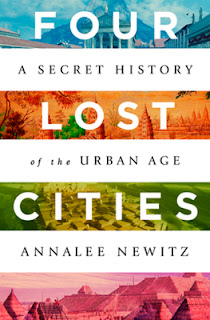 Four Lost Cities by Annalee Newitz is a highly recommended entertaining and informative look at four cities from history that were abandoned. Everyone loves a good lost city story, but these cities weren't actually lost, people knew they existed, but they were deserted.

Newitz writes: "Modern metropolises are by no means destined to live forever, and historical evidence shows that people have chosen to abandon them repeatedly over the past eight thousand years. It’s terrifying to realize that most of humanity lives in places that are destined to die. The myth of the lost city obscures the reality of how people destroy their civilizations. This book is about that reality, which we’ll explore in four of the most spectacular examples of urban abandonment in human history." The four ancient cities examined are Çatalhöyük, Pompeii, Angkor, and Cahokia.

Çatalhöyük is a Neolithic site buried beneath two low hills in the Anatolian region of Central Turkey that was founded around 9,000 years ago. People here were settling down into agricultural life after living as nomads. The population was probably between 5,000 and 20,000 for about a millennium. Pompeii is the most well known city. It was a Roman tourist town on the sunny shores of the Mediterranean until the eruption of Mount Vesuvius in 79 and buried the city under a deep layer of volcanic ash. The medieval megacity of Angkor in Cambodia experienced a slow-motion abandonment and destruction as the city was hit by climate catastrophes lasting a century. The indigenous metropolis Cahokia was the largest city in North America before the arrival of Europeans. It grew from a small village located on the Mississippi River bottom where East St. Louis is today to a sprawling metropolis of over 30,000 people and covered both sides of the river. The many groups of people who composed this city and shared spiritual practices eventually experienced several droughts which changed their practices, and they divided back into their individual groups and left.

Four Lost Cities is written in a very accessible manner, so even the layperson who is interested in archaeology but hardly a scholar, can easily understand the information Newitz presents. They traveled to all four sites and talked to many of the researchers and scientists studying the sites and they share the new, cutting edge theories and interpretations of what life was like in the cities, before, during and after their decline. And that is the really interesting fact - these cities experienced a slow decline, with the obvious exception of Pompeii, that occurred over decades or longer. People chose to leave the cities, and for good reasons. Each of the cities encountered lengthy periods of political instability joined with major environmental problems.

Personally I found Newitz's focus on the everyday people that built and populated these cities and their functions in that particular society fascinating. It is also refreshing to see the new archaeological focus on how each society likely function rather than observing it through the lens of Western Civilization. All of the observations shared are well-researched. They talked to the experts currently involved with the sites and information is included in chapter notes if you would like to pursue more information.

My review copy was courtesy of W.W. Norton & Company via Netgalley.