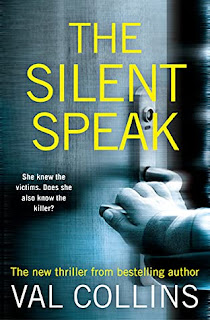 The Silent Speak by Val Collins is a recommended mystery/whodunit.

Aoife Walsh is in a relationship with Detective Conor Moloney. His teenage son Blaine enjoys her young daughter Amy, but is still withdrawn and sullen around Aoife. Conor and Aoife plan to marry after her divorce from her manipulative husband Jason is finalized, but she doesn't want to announce any engagement. She hopes she can have some kind of good, or at least cordial relationship with Blaine, but it currently seems doubtful.

When she hears the horrific news that an entire family has been violently murdered, she is shocked to hear that the two parents were in her book club. The police believe it was a murder-suicide, but the sister of the husband/father is sure that he would never do such a horrendous act. The sister, Lisa, is not getting information or answers from the police so she wants Aoife to investigate. Lisa knows that Aoife is still a part time freelance journalist, so she will give her an exclusive story if Aoife can uncover what really happened. It is an offer that Aoife can't turn down, so she begins to look into the murders.

The Silent Speak is a fast-paced whodunit that can be read as a standalone novel even though there is apparently a previous book featuring Aoife. There are plenty of twists and you will certainly keep reading to see what happens next. There are plenty of suspects as Aoife conducts her investigation and keeps uncovering more and more information that the police apparently may have missed. It becomes even more serious when another death occurs and it is clear that it wasn't a murder-suicide and the murderer is still at large.

This is an enjoyable novel, although there are numerous times you will also have to set your disbelief aside. This would include that a young part-time freelance journalist with a very young daughter would, quite frankly, have the time to do this, uncover new information so quickly, and that she would manage to get people to talk to her so freely. Character development is also light, but that could be due to previous books featuring the characters. It does have twists in the plot and plenty of suspects, though, so it is enjoyable escapism.

Disclosure: My review copy was courtesy of Val Collins Books