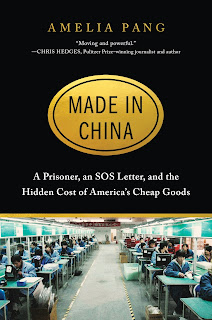 Made in China by Amelia Pang
2/2/21; 288 pages
Algonquin Books of Chapel Hill


Made in China: A Prisoner, an SOS Letter, and the Hidden Cost of America's Cheap Goods by Amelia Pang is very highly recommended exposition on China's labor/reeducation camps, human rights violations, and how our consumerism is a tacit approval of the system.

Everyone should read this book. Everyone. And then reexamine their own involvement with cheap Chinese merchandise. Take note that if you buy something made in China it was likely made with slave labor. That should cause you to take pause in and of itself, but it becomes even more crucial to take action if you combine it with the fact that China is the world’s largest producer of greenhouse gases, and their rates are vastly under reported.

When Julie Keith opened up a package of cheap decorations in 2012, she discovered a plea for help written by the prisoner who made the items. The note was written by Sun Yi who was taken prisoner and put in a reeducation camp/ forced labor camp by the Chinese Communist Party. His crime was practicing Falun Gong with a religious meditation group.

Pang shares the life of Sun Yi, including the horrendous torture he and others endure in the "laogai system" which is the world’s largest forced-labor system. The system is rarely labeled as prisons, rather they call the camps reeducation centers or detoxification centers. No matter the name, they are still forced labor centers where people are sent at the whim of the CCP. The people in forced labor include the Falun Gong practitioners, as well as Christians, Turks, Muslim Uighurs, and Tibetans. Companies who get their products that are made with the forced slave labor from China never receive them directly from the prisons, instead they are exported and purchased through an import-export company system. It also appears that China is now in the business of organ selling. They get the medical information from the prisoners and will harvest their organs. The transplant industry in China is a billion dollar industry.

With modern AI surveillance technologies, the CCP is targeting even more people as they can identify them. Think about this information as you blindly follow any social media platform: "As early on as 2004, China has built the most extensive surveillance and internet censorship system in the world, with currently an estimated one hundred thousand human censors inspecting the web for politically sensitive content and manually deleting posts on various Chinese social media platforms. They are employed not only by state propaganda departments, but also by Chinese companies that have privatized censorship. And then there are the commenters, who are paid to guide online discussions in a pro-government direction. A 2017 Harvard study estimated that 448 million paid comments appear on Chinese social media every year." China is said to be one big modern, technologically savvy labor camp.

This is not an easy book to read but it is vital that people know what is going on in China. If people show any dissent in China, this is how they handle it - imprison them into forced labor. Pang immersed herself into Sun's story and that of other labor camp survivors over three years. Note that according to a 2017 study by the Economic Policy Institute, "China’s accession to the WTO caused the United States to lose 3.4 million jobs. And as manufacturing migrated to China, it created more opportunities for Chinese factories to outsource work to labor camps." What we can do is limit how we spend our money and investigate the companies we buy from because China does respond to financial push back.


Disclosure: My review copy was courtesy of Algonquin Books of Chapel Hill