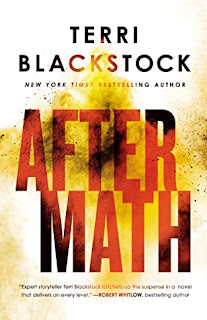 Aftermath by Terri Blackstock is a highly recommended novel of suspense.

Three friends are attending a concert and political rally in Atlanta when a bomb explodes at the venue. Only one young woman, Taylor Reid, makes it out alive. A short time later Army veteran Dustin Webb is pulled over by the police on a nearby highway. They had a tip and a warrant on the way to search his trunk. Dustin allows them to search it, knowing there is nothing incriminating inside. He is shocked when they discover four boxes of explosives. Someone planted the boxes and is setting Dustin up. To make matters more incriminating, Dustin had installed the security system at an ammunition plant where explosives were recently stolen.

Dustin contacts criminal attorney Jamie Powell. They were neighbors and friends as children but haven't spoken for years. Jamie always wondered what happen to Dustin. Knowing him, she takes on his case and sets out to try and figure out who is framing Dustin and why. Meanwhile, Taylor is struggling with her OCD and trying to make sense of why her friends died. She wants revenge for her friends. She learns from the news that Dustin is a suspect and begins stalking him.

While the writing is very good and the suspense is kept high as far as the action and details are concerned, the actual plot and perpetrator is predictable. This doesn't mean the journey arriving at the denouement isn't worth the time, it is very entertaining and suspenseful following all the revelations getting to the ending. The real plus is that Blackstock writes novels of suspense featuring faith-based characters. They struggle with life in a realistic way, facing emotional turmoil and grim situations without resorting to expletives. The character development helps make this novel worth the time as Blackstock delves into the background of Dustin and Jamie with flashbacks to how they met and their relationship growing up. Both the characters of Dustin and Jamie are interesting and you will wish the best for them. The only real unpredictable actions are from Taylor.

I received a complimentary copy of this book. Opinions in this review are completely my own.