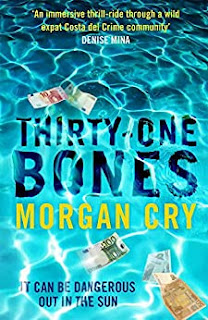 Daniella Coulstoun travels to El Descaro on Spain Mediterranean coast to bury her deceased mother, Effie. The two have had a distant relationship for twenty years so Daniella has little knowledge or information about her mother's life in Spain. She knows Effie left Scotland when Daniella was sixteen to move to Spain where she owned and ran a pub, Se Busca. Se Busca was patronized by British expats and certain criminals, and apparently Effie was the leader of the group of misfits who called themselves Expatriots. What Daniella didn't know was that the ExPatriots had a money making scam going on and had conned would-be-investors out of 1.3 million euros. The money was to be divided between members of the group to give them a new start in life. Now Effie is dead and no one knows where the money went.

As soon as Daniella arrives in Spain, her mother's friend and ex-lawyer, George Laidlaw, is surly and confrontational with Daniella. He wants to know where the money is and he is holding Daniella culpable for recovering it, under a threat of violence. Daniella, of course, has no idea what he is talking about so she must uncover not only what he is talking about but try to figure out where her mother, whom she didn't have a close relationship with, would have hidden the money. Threats and cons seem to be coming from all sides and Daniella quickly realizes she can't really trust anyone and she must rely on her own wits to find the cash.

This crime novel is really more of a madcap scramble of uncovering clues and fraud while facing lunacy and threatening physical intimidation. Thirty-One Bones is surprising lighthearted and humorous at times, even when physical violence seems an obvious conclusion to Daniella's search for the truth - as when she is threatened with having thirty-one bones broken if she doesn't provide the information sought. Daniella is a well-written character and likeable, so readers will hope she uncovers the truth, while also, maybe finding a new place for herself in El Descaro. Cry (Brown) does a credible job writing this novel through Daniella's point-of-view.

The writing is excellent. The chapters mainly focus on Daniella's search. In-between these chapters are brief excerpts of a police interview of the various players in the con. Humorously, these chapters all end with someone replying to a question, "It's complicated." The plot starts out at an even pace and picks up speed as Daniella's investigation begins to follow clues and uncovers new information. The ending wraps everything up neatly, almost too neatly, but it seems appropriate for this clever novel of misfits in the sun.

Disclosure: My review copy was courtesy of Simon & Schuster in exchange for my honest opinion.