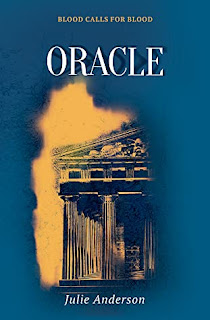 It has been two months since the events that occurred in Plague. Cassie is still reeling from those events and trying to recover emotionally. In Oracle Cassie has been sent to Delphi, Greece where she is representing the Prime Minister of the UK and is scheduled to give a presentation on tax policy. Her real purpose for attending is to secure a future meeting in London between a Greek government minister and the Prime Minister. The center where the conference is being held on the slopes of Mount Parnassus near the ruins of the Temple of Apollo. Helena, Cassie's interpreter, meets her at the center and the two work well together. Quickly, the narrative introduces clues even before the first murder happens and Cassie is asked to help with the investigation.

At this point the novel takes on the task of melding the tried and true plot device found in Agatha Christie's Murder on the Orient Express with Classical mythology. Storms hit the conference center and phone lines are down. They are all isolated and the weather along with the terrain make investigating difficult. Basics of Classical Mythology are introduced in a visit to the Delphi Temple (so you won't need to refresh your memory). Complicating the plot are environmental protesters, the uncooperative and secretive way those involved in the investigation are behaving, the history of authoritarianism and justice in the area, and the group Golden Dawn.

Cassie is an interesting character and has to overcome a language barrier as well as cultural differences in her investigation. Admittedly, I still have not connected with her as a character after two novels, but I was able to overlook my qualms and enjoy the narrative. The action moves along at a quick pace with clues being provided almost right from the start. Classical Mythology has been a long time personal interest and I enjoyed the introduction of elements from mythology into the plot. I also liked the use of the plot device of isolating the characters. Some suspension of disbelief is, again, required as you follow Cassie's involvement in the investigation. Intermixed in the plot are current social and political concerns the author holds.

Disclosure: My review copy was courtesy of Claret Press in exchange for my honest opinion.
Posted by Lori L at 11:22 AM