The Other Side of the Door 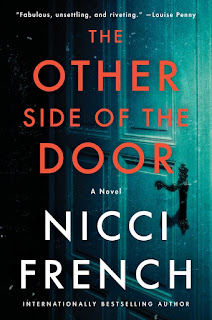 The Other Side of the Door by Nicci French is a highly recommended who-dun-it and a re-release of 2009's Complicit.

The novel opens with Bonnie Graham seeing a body on the floor, but instead of calling the police, she calls a friend to help hide the body and clean up the crime scene. Then the novel flips back and forth in time between the present in "After" chapters referring to events after the body was taken care of and "Before" chapters following the events that happened before the death. Bonnie is a music teacher who, before the death, gathers together a group of musicians to form a band to play at her friend's wedding. Hayden is a professional musician who joins her band and the two become involved. Hayden is the man found dead in the opening and the investigation is in the After chapters.

The unfolding of the plot is a complicated knot of interpersonal problems, misinformation, and misunderstandings in both timelines. The alternating between before and after helps keep the suspense up and the tension high. In the after chapters we follow the investigation into the death but in the flashbacks also learn more information about the characters in this book and the events that lead up to the death. There are actions by the characters and abuse that is tolerated that seems questionable, but as more information about all the characters is carefully presented there is a lot of satisfaction in the final twist. Since this is a renamed re-release of a previously published novel, I'm uncertain if the original novel was rewritten or revised before publication.

Disclosure: My review copy was courtesy of HarperCollins in exchange for my honest opinion.