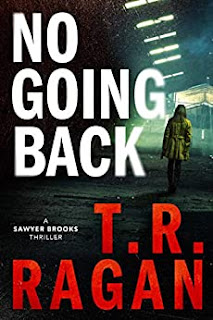 No Going Back by T.R. Ragan is a highly recommended thriller and the third book in the Sawyer Brooks series.
Sawyer has been covering the female vigilantes dubbed The Black Wigs, but now it appears that there are copycats out there dispensing their own extreme and fatal justice to sexual predators and capturing their fear to share on social media. The police think that these copycat vigilantes are related to The Black Wigs group of women, The Crew, and their actions, but Sawyer is positive it is a new person and she sets out to uncover who is behind the crimes. Her investigation leads her to nefarious bullying by a group at a Sacramento children’s home and a gang rape at a fraternity party.

It was very enjoyable to return to Sawyer Brooks and her investigative journalism, setting aside the dark, disturbing content that leads to her investigations. Admittedly, I liked the second book a little more than this third installment in the series, but it still featured a compelling plot and returning readers, like me, will be invested in the novel. The first two thirds of the novel was gripping and much better than the ending in No Going Back. Since I felt book two, Out of Her Mind, did not have a resolution to one of the story lines, I was hoping for that this time around. There is more forward movement in character development and resolution of many of the story lines. It seems that the series may be continuing in a new direction and I'd be interested to see where it goes.

Disclosure: My review copy was courtesy of Thomas & Mercer via NetGalley in exchange for my honest opinion.
Posted by Lori L at 12:17 PM