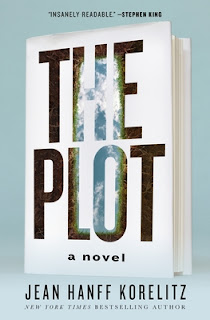 The Plot by Jean Hanff Korelitz is a highly recommended novel of psychological suspense.

Jacob (Jake) Finch Bonner is a writer who has had one well received first book and that has been it for years. He teaches creative writing at a third-rate low-residency MFA program at Ripley College in Vermont. His self esteem and self-respect are low and he really hasn't written anything for years. When an arrogant student, Evan Parker, claims he needs no help writing because his novel is so unique it will be a best seller, Jake doubts this until Evan tells him the plot of his novel. Jake spends several years bracing himself for the publication of Parker's novel - which never comes. He looks into it and discovers that Evan has died and never finished his book. Jake decides to write the novel himself and it is published to critical acclaimed and becomes a phenomenal bestseller.

Jake is now wealthy and a lauded novelist for the novel Crib. He is traveling on a book tour and speaking to packed crowds when he receives an email saying, "You are a thief." Concerned and increasingly suspicious that Evan told someone else about the novel he was writing before he died, Jake begins to look into Evan's life. It is clear that Evan told no one about his novel. It is also clear that Evan's plot wasn't his idea, he actually took it from someone's life story. As the emails and accusations slowly ramp up, Jake becomes increasingly desperate and paranoid

The narrative follows Jake's story with excerpts from chapters in his book Crib interspersed, which gives the reader an idea of the plot of the novel Jake wrote based on the plot Evan told him. Korelitz leaves enough clues that it is possible for astute readers to figure out what is going on. This reader was not shocked by the twist. I knew who was threatening Jake as soon as it was possible to figure it out. That is not to say that the journey reaching the big final denouement wasn't worth it, but it wasn't a shocking twist. It's also surprisingly, for a novel about a unique plot, not a unique plot.

The story of The Plot starts slowly and Jake is a commonplace character at the start as his struggles as a writer and his self-doubt is established. This is contrasted later with his success after Crib is published. He becomes more interesting at the point because that is when the guilt over the purloined plot enters the picture. Basically, The Plot is much more compelling in the second half of the narrative, after he marries and is filled with tension. Jake is a sympathetic character, but not very distinctive, and comes off as a conventional caricature of a man filled with guilt over his actions.


Disclosure: My review copy was courtesy of Celadon Books in exchange for my honest opinion
Posted by Lori L at 11:44 AM