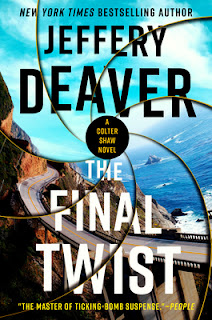 The Final Twist by Jeffery Deaver is a highly recommended thriller and the third novel featuring Colter Shaw.

Colter, a professional seeker of missing people for the reward money, finds himself in San Francisco. He is following clues his father left in his search for the missing courier bag containing evidence that will bring down BlackBridge Corporate Solutions, a firm responsible for hundreds, perhaps thousands, of deaths. While searching he knows he is being followed by operatives that are Blackbridge enforcers who are out to kill him. Shockingly a figure from his past surfaces, his estranged older brother, Russell, who has a team of his own. They work together to take down Blackbridge and save a family who is slated to die. If that isn't enough, Colter also begins searching for missing person Tessy Vasquez for her mother, Maria.

The first two novels featuring Colter Shaw are The Never Game and The Goodbye Man. Unfortunately, I haven't read either of these novels but that didn't curtail my enjoyment of The Final Twist. There is enough background information provided that you can follow the action and have all the background information you need. The action is non-stop and there are plenty of deceiving clues and twists to keep you glued to the pages in order to keep track of everything going on and try to figure out what exactly is going on. This is a complicated thriller full of action, mystery, and danger. It is a well-written thriller that you will be hard press to put down.

Colter is a well-developed character. Even without reading the first two books, I felt I had a good handle on who he is, his background, and what is important to him. Throughout the novel are words of wisdom his father imparted to his children. Some of these lessons and admonitions are surprising, but not in relationship to Colter's upbringing and they had a profound effect on his character and how he thinks and views the world.

All in all this is good escapism and an exciting thriller that will make the time fly by while reading.

Disclosure: My review copy was courtesy of Penguin Random House in exchange for my honest opinion.