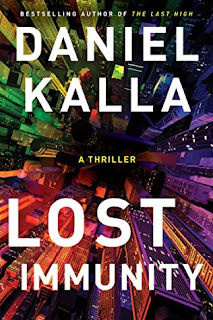 Lost Immunity by Daniel Kalla is a recommended medical thriller.

Lisa Dyer, Seattle’s chief public health officer, is suddenly facing a deadly outbreak of meningitis. The same strain broke out in Iceland six months earlier, with devastating losses. This outbreak explicitly emerged at a nearby camp and the virulent strain of bacteria is now infecting teens and children. Due to the Icelandic outbreak, a pharmaceutical company immediately began work on developing a vaccine and is currently commencing final-phase trials on it. Lisa contacts Nathan Hull, vice president of the pharmaceutical company that developed the new vaccine, and requests doses of it to release to Seattle's citizens in order to stop the meningitis outbreak and save lives. This decision is met with resistance from several fronts and tension increases when people who have been treated begin dying. Lisa must find out why the initial success is now resulting in fatalities.

Kalla is a well-respected writer of medical thrillers and, as a working ER Physician, he has insight into into the medical community that provide a realism to his novels. In Lost Immunity, Kalla takes observations from the current health crisis and applies his observations to a bacterial outbreak of meningitis instead of a viral outbreak. Controversy surrounding vaccines plays a major role in the plot. The believable plot moves along at a brisk pace, keeping the tension high and instilling a palpable interest in the outcome. In some ways this almost mirrors reality too closely.

My qualms about the book are two fold. Lisa wasn't a compelling protagonist for me and it was a challenge to overlook certain aspects of her personality. Secondly, keeping this wording spoiler free, I knew the antagonist almost from the start and what would be a major emotional plot point. So, this is a recommended medical thriller for the fast-paced plot, but parts of the narrative will be very predictable for many readers. It must also be said that I do look forward to Daniel Kalla's next book.

Disclosure: My review copy was courtesy of Simon & Schuster in exchange for my honest opinion.