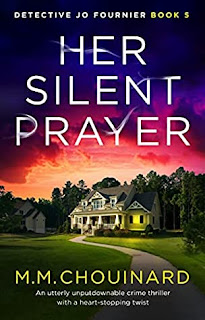 Her Silent Prayer by M.M. Chouinard is a very highly recommended procedural/thriller.

Detective Jo Fournier and her partner Bob Arnett are called to the case of a single mother, Melissa Rollins, found dead trapped inside a closet with the doors nailed shut. The heat in the house was turned up to 95 degrees during a heat wave in Greenfern, CA, and Melissa died of thirst. With no sign of a break in, it appeared that Melissa knew her killer and let her in. Melissa was in a custody battle with her ex who had accused Melissa of child abuse. Then Jo uncovers a recent case where another single mother was killed and the two cases have unsettling similarities.

At the same time Jo is privately working a cold case from the past where a serial killer appeared to have committed suicide by jumping off the Golden gate bridge, but may have actually been killed. Jo needs to keep her interest in this case quiet as Lieutenant Hayes has it in for her, but so far thirteen out-of-state tourists have been killed with similarities that make it clear it could not be a coincidence.

Soon these two separate investigations are heading on a collision course and a killer is savvy to Jo's interest and is now following her.

This is my first novel by Chouinard and won't be the last. I haven't read the previous novels featuring Jo Fournier, but I felt this one worked as a stand alone novel too, although if you like a writer it's always a good idea to check out the whole series, which I will do. The writing is excellent as is the character development, especially considering this is part of a series. I liked the details provided about following the clues and uncovering more information to solve the intricate cases. Providing superior information regarding the police work in a procedural is always appreciated.

This novel veers into psychological thriller territory as the investigation evolves. You will find yourself saying, "Just one more chapter." Luckily the chapters are short and the pace quick. Her Silent Prayer is a good choice for anyone who likes procedurals and especially procedurals that are fast paced, well-written, complicated, and become personal.

Disclosure: My review copy was courtesy of Bookouture via NetGalley.
Posted by Lori L at 11:26 AM