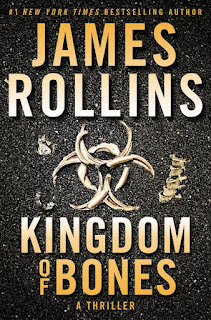 Kingdom of Bones by James Rollins is an action-packed, heart-stopping, un-put-downable thriller and the sixteenth addition to the Sigma Force Series. This one's a winner!

A UN relief team in the Democratic Republic of Congo has been overrun by nature running amok when floods send refugees to the camp who swiftly reach a catatonic state. Quickly following this, the camp is then overrun by violent attacking ants. After being bitten people can rapidly notice the effects. Because something is changing in the evolution of insects and animals the fear is that it could be the start of a pandemic so members of the Sigma Force team (Gray, Monk, Kowalski) are sent in along with former Army Ranger Tucker Wayne and Kane, his dog. Before they even reach the camp to rescue them from the ant armies, it is attacked on several different fronts, human and animal, and doctors are taken as prisoners. Quickly a mission for information and support becomes a rescue mission fraught with danger.  It is discovered that part of the answer may lie in the legendary Kingdom of Bones.

Kingdom of Bones starts at a gallop and this fast pace is nonstop until the end. Once you start reading it is impossible to put down. The new characters introduced for this adventure are all wonderfully interesting and capable or decidedly evil. The writing, as expected, is extraordinary, both in structure and execution. The plot is entertaining and frightening while the threats against the team are non-stop. This is one of my new favorite Sigma Force novels. I've read almost everything Rollins has written, however this is the first time he had me sobbing so hard I couldn't see and had to concentrate to pull myself together because I could not stop reading. When you read Kingdom of Bones you'll know when this scene happens. (I silently cursed him for this part.)

Rollins has had viruses and threatened pandemics in his plots before so this should be nothing new for long time readers, although it is understandable why he had second thoughts about it this time. I am thrilled that he continued to write the novel because it is incredible and everything anyone could want in a Sigma Force novel. As expected he has an informative Author's Note to Readers: Truth or Fiction section at the end of the novel, which I always appreciate and find informative.

Disclosure: My review copy was courtesy of HarperCollins via Edelweiss.