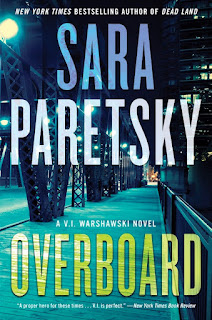 V.I.'s dogs get loose during a walk and discover an injured and unconscious teenage girl hiding in the rocks along the shoreline of Lake Michigan. The girl regains consciousness enough to only utter one word, nagyi, before the paramedics whisk her away to the hospital. The girl isn't identified before mysteriously disappearing from the hospital. As V.I. looks into her disappearance, a whole host of corrupt individuals, including cops,  come out of the woodwork and start harassing her. Soon it becomes clear that V.I.'s life is in danger too.

There is a whole lot going on in this latest installment of the long running series. As expected at this point, after 20 previous installment of the series Paretsky has her formula for writing V.I. Warshawski novels down pat. The action, new information, complex plot, and twists hold a reader's attention, keep the pace quick, and the plot compelling. Everything in the plot isn't necessarily believable, but it all does lead to a conclusion that will satisfy fans.

Since this is a series with many previous installments V.I. and all her associates are well-known characters to many people. Those trying the series for the first time can likely keep up with the plot and all the characters, but at this juncture it might be best to have with some familiarity with them before starting the latest novel.

Adding to the action is the pandemic featured front and center in the plot, which many people can do without now. Also as expected, Paretsky makes her political views clear. It is clear that it was written in 2020, but it will be published in 2022. Time has passed. Considering the current climate it would have been a wiser choice to just choose to write an exciting thriller and keep personal political/social views to themselves as it diminishes and dates the novel. 3.5 rounded up

Disclosure: My review copy was courtesy of William Morrow.