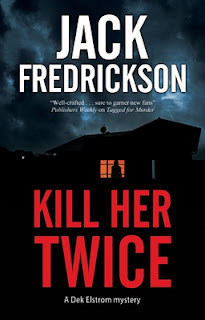 Kill Her Twice by Jack Fredrickson is a highly recommended hard-boiled detective story set by Chicago.

Private investigator Dek Elstrom is hunting for a lost cat with a $100 reward when Martin Tripp wants to hire him to prove he didn't kill Sara Jansen. Tripp has already stood trial and been acquitted for Sara's murder. The problem is that he says he can't find a job now due to his infamy and he thinks Sara was afraid of something before she died. Elstrom isn't exactly eager to take on this case and he thinks Tripp is guilty of her murder, but he can use the $200 Tripp pushes on him. Once he begins to causally investigate, he discovers that a whole lot more was going on in the corrupt River City.

On the one hand I do appreciate an involved and complicated hard-boiled detective case that resembles a tale of gangsters from the 1930s. The description that Kill Her Twice is a Windy City noir with a distinctly retro feel is apropos. A story that actually tries to be timeless is appreciated and to be applauded. On the other hand, elderly women being lewd in a corrupt town is just not my thing. If I set that aside, during the investigation the suspense does build incrementally and the atmosphere becomes tense and full of suspicion in Kill Her Twice.

This can be read as a stand-alone novel even though it is the eighth book featuring Dek Elstrom. As my first Elstrom book I didn't feel behind or out of pace with the character and plot. Suspicions grow with each page and each new character introduced. There is also a humorous element to the novel, which helps in creating the noir-feeling as it propels the action forward. There are plenty of characters to draw your suspicion and entertain you, a tense atmosphere that grows as each new development, and complications to keep you guessing.

The narrative is told through Elstrom's first person point-of-view which means you are privy to his private thoughts and perceptions. He is an intelligent character, personable while also jaded with the corruption around him. He knows how the system works and how to use it to his advantage. 3.5 rounded up

Disclosure: My review copy was courtesy of Severn House via NetGalley.