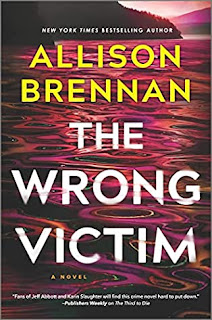 The Wrong Victim by Allison Brennan is a very highly recommended procedural and the third book in the excellent Quinn & Costa series.

In Friday Harbor on Washington’s San Juan Island a bomb explodes on a charter cruise killing 9 people. The boat was piloted by retired FBI agent Neil Devereaux. FBI special agent Matt Costa and LAPD officer Kara Quinn, who’s on loan to the FBI, along with other members of his Mobile Response Team are on the scene to investigate the bombing and try determine if one of the passengers was the target or if it was an action planned by a local environmental group who has been protesting the charter boat company.

The Wrong Victim is another winning procedural in the Quinn & Costa series which started with The Third to Die and Tell No Lies. All have been five star reads. Everything I love about a great procedural is here. The writing is exceptionally good and will hold your attention throughout the whole novel. The action-packed plot presents a detailed, intricate and engrossing investigation that follows the clues and discoveries as they are found. Readers get to follow along with the investigation as the agents and detective uncover more information. Yet again Brennan has written a sophisticated novel that demands you closely follow the clues and action in the plot.

The characters are all written as real people with their own issues and flaws. There are plenty of suspects and tension among team members. The Wrong Victim does require that you pay attention while reading to keep track of all the characters and their actions. This would also work as a stand alone novel as enough backstory is expertly included to provide the information you need. Another winning procedural that is sure to make my list of top procedurals of the year.

Disclosure: My review copy was courtesy of MIRA.