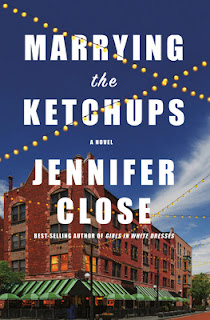 Marrying the Ketchups by Jennifer Close is a recommended family drama.

The Sullivans are a Chicago restaurant family who are all under crisis. Bud, the patriarch and founder of JP Sullivan’s is thrilled when the Cubs win the world series and then he dies 23 minutes later. Adding to their distress is Trump being elected president, and concern about the family matriarch Rose, who is in an assisted living facility. The novel focuses on Bud's three grandchildren.  Gretchen, a lead singer for a 90's cover band is reassessing the direction her life is taking after a breakup and heads home. Her older sister, Jane is sure her husband is having an affair and is questioning her entitled lifestyle and her marriage. Their cousin Teddy is the manager who would like to take over JP Sullivans and is wondering why his ex keeps showing up at the restaurant.

Marrying the Ketchups is a very character-driven novel which requires that the characters all be portrayed as realistic and unique individuals, which Close does very well. Readers will be interested in following their lives and will feel invested in what happens to them. The characters all experience growth as they adapt to the changes they encounter along the way. The situations and problems all the characters are experiencing are basically commonplace occurrences. Family dynamics, transitions, and grief all play a large role in the novel. The writing shines in the depiction of the characters.

The plot is rather slow paced without a whole lot of drama aside from the normal family interactions. Don't expect a huge twist or surprise. Much of your enjoyment may hinge on how much you enjoy family dramas and, more predominately, how much very polarizing political talk you can accept in a novel. Unless you are writing historical fiction this dates the novel immediately as occurring during a specific time period. There are pros and cons to this and generally I caution an author to keep their ardent personal political/social views to themselves as it diminishes and dates the novel. Other than the immediate division the political aspects take, Marrying the Ketchups is an engaging examination of a family.

Disclosure: My review copy was courtesy of Knopf Doubleday.
Posted by Lori L at 12:08 AM