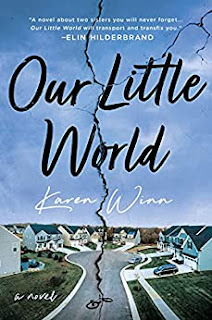 Our Little World by Karen Winn is a highly recommended coming-of-age drama.

Sisters Bee (Bourka) and Audrina Kociss have always been close until recently. Audrina, a year younger than Bee, is pretty, outgoing, and the favorite of everyone, including their parents. While Bee struggles to fit in it seems Audrina does so effortlessly. Neighborhood mothers take turns driving the kids to school and to either the club or the lake during the summer. It is July of 1985 when Max and Sally's mom's takes them all to Deer Chase Lake in New Jersey. This is the day when four-year-old Sally goes missing and changes everyone's illusion of safety and stability. Audrina and Bee's relationship becomes strained and distant under the stress of the disappearance and Bee's move into seventh grade, as well as a secret Bee is holding.

Our Little World is an excellent, well-written, even paced character driven novel coming-of-age drama that examines the complicated relationship between sisters and in families. This is the story of loss and lost innocence as the sisters grow up. Bee is our narrator and tells the story of their complicated relationship, secrets unspoken, harsh words exchanged, and how envy and trauma asserted themselves and changed things. All of the characters are depicted as realistic, believable individuals with flaws, strengths, weaknesses, and secrets.

Winn excels at setting Our Little World during a specific time and place. Those who knew the 1980's will immediately recognize the time period and little tidbits of descriptive information the clearly set the novel in the '80s. Readers will know at the start that Audrina is going to die, but how, when and why won't be answered until much later in the novel. The disappearance (and presumed murder) of Sally changes everyone's life in some way as it is the major occurrence in the first part of the novel that propels the plot forward toward the second part of the novel, which focuses on Audrina.


Disclosure: My review copy was courtesy of Penguin Random House via NetGalley.
Posted by Lori L at 2:25 PM