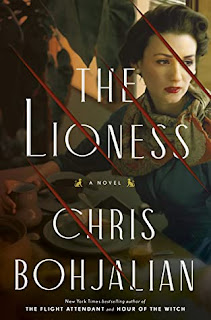 The Lioness by Chris Bohjalian is a highly recommended historical literary fiction novel set in Tanzania in 1964.

Katie Barstow an A-list actress, and David Hill, her husband, have chosen to bring a group of family and friends to accompany them on a photo safari to the Serengeti for their honeymoon. Included in the group are Billy Stepanov, Katie's brother, and his wife Margie; Reggie Stout, Katie’s publicist ; Peter Merrick, her agent; Carmen Tedesco, her best friend and actress, and Felix Demeter, Carmen’s husband; and Terrance Dutton, Katie's recent co-star. A list of the large cast of characters is included in the front of the novel which can help readers keep track of the many players in this drama.

The vacation/safari starts out lovely until a group of Russian mercenaries kidnaps members of the entourage, killing the guides. They keep guns trained on their hostages, who are divided up into different groups while they load them into different Land Rovers and drive them away to a group of huts where they are tied up. No one is safe and not everyone is going to make it out alive.

As a character driven drama, the exceptionally well-written narrative is told through the point-of-view of individual characters in their own chapters. These chapters are opened with Hollywood gossip columns or stories and then follow with flashbacks, background information, and events from the current horrific situation as experienced by that particular character. We know the inner thoughts of these people and learn their strengths and weaknesses. This background information also can point to the motive for the kidnapping, although the complete reason is explained at the end. There is violence from humans and from wildlife in the Serengeti.

While a wonderful addition to the selection of historical literary fiction and character driven dramas, The Lioness will actually make a more impactful and powerful movie than novel. As a novel, while compelling, it also moved a bit slowly. Visually sometimes facial expressions and looks exchanged by characters or directed toward a character can express a volume of words. Background stories can also be covered quickly with flashbacks. The only real question would be how much of the violence would be shown.

Disclosure: My review copy was courtesy of Knopf Doubleday via NetGalley.