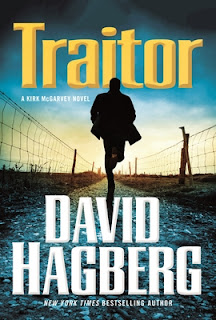 Traitor by David Hagberg is a highly recommended thriller and the 27th and final novel in the Kirk McGarvey series.

Otto Renke, the CIA chief of electronic surveillance, has been arrested, charged with treason and quickly whisked away to be held in a secret location. His best friend, Kirk McGarvey (Mac) and his wife Petey fly in from Japan to clear Otto's name and support his wife, Mary. In the meantime, Otto is  being interrogated by a homeland security agent. Someone or some foreign agency is clearly targeting Otto and must be stopped. Sadly Otto's computed, named Lou, is unable to be accessed for help. The real traitor must be found in order to clear Otto.

As the 27th novel in the series, I admittedly felt like I was several steps behind in knowing the players and their background in this series. It is still an enjoyable thriller and provided plenty of tension and suspense. There is enough information provided to follow along with the characters current situations as well as their back story. No concrete information is giving about the evidence that is being used to charge Otto, but aside from that, Mac and Petey are fighting other intel agents while trying to prove Otto's innocence. This was at times a rather slow moving thriller but it still held my attention throughout.  I somehow haven't read any of the previous novels in the series, but Traitor has convinced me that it's time to start at the beginning of the series and work my way to this final novel.


Disclosure: My review copy was courtesy of Macmillian