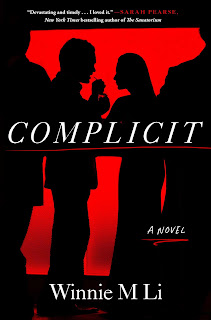 Complicit by Winnie M Li is a highly recommended literary fiction novel and an inside examination of the MeToo movement.

Sarah Lai is currently teaching screenplay writing at community college, but she always loved movies and dreamed of a successful job in the movie industry. Ten years earlier, she was thrilled to have a chance to get her foot in the door as an unpaid intern at Firefly Films with the founder Sylvia Zimmerman. Sarah impresses Sylvia with her hard work and dedication so she officially hired by the production company. Up-and-coming writer and director Xander Schulz is working on a script for his first feature film and Sarah will be the assistant producer on it. When the film is shown at Cannes, British billionaire Hugo North is impressed. He backs the company, rebranding Firefly as Conquest. Xander's next movie is going to be filmed in Los Angeles and will be the break-out film for famous actor Holly Randolph.

When Sarah is contacted by New York Times writer Thom Gallagher who wants to interview her, she is reluctant to tell her story from year ago, but agrees to do so, if only to set the record straight about the abuse of power by Hugo that ended her career. She is also questioning if her actions were somehow complicit in perpetuating the exploitation.

The narrative mainly consists of Sarah telling her story to Thom with some excerpts from present day interviews of other people Thom is talking to randomly mixed into the story. Thom is an investigative reporter, so he is talking to several people from Hugo's past. He may ask a few questions, but most of the novel is Sarah telling her story as well as the shorter interviews of others telling their story or trying to hide it. There are other themes beyond the exploitation of woman which include the experiences of immigrant Americans and family dynamics.

The quality of the writing is excellent, which is what pulled me into Sarah's story, elements of which can be found in the story of the lives of many women. The actual idea of complicity is introduce, but not explored deeply at a personal level, although it is clearly described in the atmosphere surrounding the film industry and wealthy and powerful men. Perhaps pointing it out and allowing Sarah to feel guilt over something that was basically beyond her control is enough. The whole industry is culturally skewed toward exploitation and the objectification of women.

Sarah is a complicated woman and an unforgettable character in many ways. The novel is really about Sarah's life. Complicit is Sarah's ode to her passion for movies, as well as a brush with fame before she is forced to face cold hard reality. All the characters are basically filtered through Sarah's point-of-view, with Thom's interviews adding a twist to them. It is also the story of many Chinese-Americans in many of the details her family and life. Admittedly, while I found it interesting, there could have been some paring down of details from Sarah's early love of movies and her initial years with Firefly.

Disclosure: My review copy was courtesy of Atria/Emily Bestler Books.
Posted by Lori L at 11:50 AM