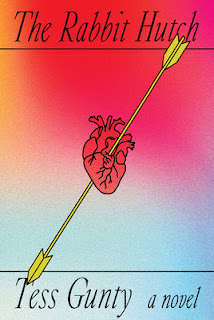 The Rabbit Hutch by Tess Gunty is a recommended story about the residents left in an apartment building on the edge of town.

Vacca Vale, Indiana, has had all industry abandon it and it is a dying town. In an apartment building known as the Rabbit Hutch, there are still residents living there, looking for a way to get by in a dying city. Apartment C2, Joan Kowalski, is lonely and detached; C6 is aging and stuck; C8 are new parents where a sleep-deprived young mother is terrified of her newborn’s eyes; and C4 is holds four teenagers recently aged out of the foster-care system, three boys, Jack, Malik, and Todd, and one girl, Blandine. The story centers around the four teenagers. In the opening Blandine is stabbed in her apartment.

What follows is the story of the residents, but especially Blandine, who desires an escape like the mystics describe in the books she reads. It is also a story of feeling lonely and entrapped when you have no where else to go in a dying city. Blandine and the teenage boys are the story. Distracting from them are the other detailed characterization of the supporting cast, as it were.

The writing is incredible and that is the saving feature of this original debut novel. However there are extended potions of the plot that deal with characters who aren't dependent upon other characters and whose parts of the narrative are isolated as unique unto themselves, the new parents being an excellent example. It seems that more editing should have been done. Yes, they new parents can be mentioned but they are obviously not the focus of the plot and don't need so much time spent with them.

This is an original debut novel and certainly portends for future work to take note of, but hopefully there will be better editing in the future. I had to force myself to finish The Rabbit Hutch, which is never a good sign. There are certainly pluses to the novel, but in the end it felt uneven.

Disclosure: My review copy was courtesy of Knopf Doubleday.
Posted by Lori L at 12:53 AM