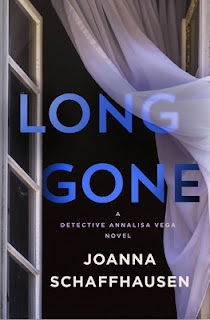 Long Gone by Joanna Schaffhausen is a highly recommended police procedural and the second book in the Annalisa Vega series.

Chicago detective Annalisa Vega is still dealing with personal fallout from a previous decision that affected her relationship with her family and other officers have lost trust in her. When she and Nick Carelli, her partner and ex-husband, are called in to investigate the fatal shooting of veteran detective Leo Hammond, she knows her investigation will be questioned. Immediately part of Leo's team, detectives Frankie Vaughn and Paul Monk show up. They worked with Leo and detective Tom Osborne as part of the fantastic four and want to take over the investigation. Then there is Leo's much younger wife who claims an intruder in a black wetsuit and diving mask killed him. Or could Moe Bocks be responsible? He is still the main suspect from a previous murder and he and Leo had a run-in a month earlier. Bocks also has a tie to her best friend.

This is a complicated, detail oriented procedural that combines the complex investigation with personal challenges. Pay attention to the various characters involved because this novel has plenty of them and they all play a role in the intricate narrative. This is my first Annalisa Vega novel and I didn't feel like much backstory was lost by not reading the first, Gone For Good. Knowing more of her backstory might have helped with the complicated family relationships, but enough is explained that readers should be able to grasp the essentials.

Annalisa is portrayed as a realistic but flawed character. She is tenacious, intelligent, introspective, and determined which all works together to create an interesting character who will likely have some longevity in a series. The other supporting characters are also developed as interesting individuals in this character driven procedural.

The writing is excellent. The suspense and tension starts immediately and continues throughout the complicated plot. Trying to guess the outcome is not going to be easy for sleuths reading Long Gone. There is so much going on that the real question is how can all these plot and subplots actually be wrapped up by the end in a satisfying conclusion.

Disclosure: My review copy was courtesy of Minotaur Books via NetGalley.
Posted by Lori L at 12:25 PM