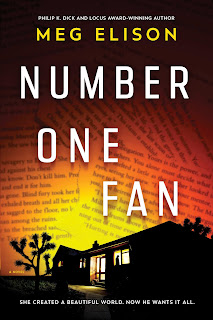 Number One Fan by Meg Elison is a recommended horror thriller in a similar vein to Stephen King's Misery.

Novelist Eli (Elizabeth) Grey, a writer, gets into a ride share or uber at the airport and immediately assumes the drinks the driver offers are all okay. They aren't. She is drugged and wakes up chained to a bed in a strange man's basement. It is clear that her abduction was planned. He possessions from her hotel room have been taken to the house. Her captor is an unhinged fan who has a plan and list of rules she must follow. Her survival depends upon her assistant noticing that something is wrong and notifying the authorities.

The treatment Eli receives is a little too physically brutal and graphic while trying to show the level of derangement that Eli's captor is experiencing. A more nuanced, psychological approach would have served the novel better. However, if a visceral, physical element to the abduction was the point, then it was reached. While I appreciated Eli's clever, astute insight into the unthinkable situation she has found herself in, I also didn't particularly enjoy the graphic nature of the narrative.

While Eli is an interesting character, the actual writing isn't quite up to the task of following her narrative in an engaging, inclusive way, beyond the violence. Having never been to a convention, the whole culture of fans at such a gathering went right over my head. I have authors I enjoy  immensely, but while I might go to hear them speak, that would be the limit to my adoration. Reading and writing are both rather private experiences and I am good with keep it that way. In the end, this is an uneven novel. It is an entertaining, horrifying novel, but the writing wanders a bit afield and the ending is unsatisfying.

Disclosure: My review copy was courtesy of MIRA Books.
Posted by Lori L at 1:51 AM