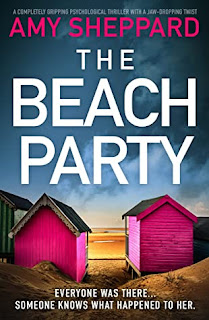 The Beach Party by Amy Sheppard is a recommended New Adult murder mystery.

Katie met her friend Sophie when they were both studying journalism at the university. Sophie has several successful podcasts and is an influencer while Katie is working in print journalism. Together the two started a true crime podcast that a network has noticed and want the two to do a deep dive into an unsolved case. Sophie plans for them to go to Cornwell to investigate the unsolved murder from six years ago. Katie lived in Pengully where the murder took place, was at the beach party that night and knew the victim, nineteen-year-old Lacey Crew. Doing this podcast will mean Katie must return to the town, reexamine what she remembers from that night, and subsequently confront her past.

I'm facing a bit of a quandary in reviewing this novel. This mystery/thriller is really written and tailored toward New Adult readers, who may enjoy it more than I did. There were several elements, however, that resulted in my recommendation, chiefly the slow revelation of facts that allowed the suspicion and tension to gradually build to the surprising twisty denouement. The murder mystery plot in the novel works quite well. I appreciated the narrative alternating between the present and the past. Having the premise rely on podcasting is a trendy choice which works.

The actual beach part in the title is recalled through flashbacks and peoples recollections rather than in real time, which isn't reflected in the synopsis. The writing isn't particularly well executed technically, but this may change in the released novel.

As written, there doesn't seem to be any reason that Katie and Sophie became friends and would remain friends after college. Sophie is more realized as a character than Katie, who could have used some additional character development. Among the various characters, past and present, there is too much relationship drama and casual encounters that sets a much younger tone to the novel, and, well, all the characters are young, in their mid-twenties. (It was also laughable when Katie describes her mother as 52, but really active for her age.)


Disclosure: My review copy was courtesy of Bookouture via NetGalley.
Posted by Lori L at 3:27 PM