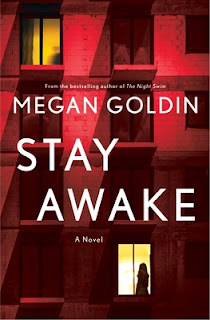 Liv Reese wakes up in a taxi and doesn't know where she is. She gets back to her apartment only to discover strangers living there. All she knows are the messages written on her hands, with STAY AWAKE featured prominently. She has lost her phone and her bag and has a bloody knife in her pocket. She is lost and disoriented in NYC. Meanwhile the police have discovered a murdered man and are looking for who did it.

The narrative alternates between Liv in the present day, Liv two years earlier, and NYPD detective Darcy Halliday’s current homicide investigation, slowly leading up to answer what is happening to Liv. Liv thinks it is two years earlier, but clearly it isn't. She is disoriented and trying to run from something or someone but she can't remember. What she does know is that she must stay awake and avoid sleep at all costs.

Liv's character is developed, but more so in the chapters that deal with her three years before the present day memory loss. She has a stalker and feels very threatening. Her present day chapters are much more repetitious and a little off-putting. I did wonder immediately, before there was much information revealed, why she hadn't written more detailed notes to herself. She can't trust anyone. Her confusion and memory loss put her at a great disadvantage. She is a bit annoying as a character, but much of this is due, in my opinion, to her not writing more detailed notes to herself.

The final denouement is satisfying and wraps up the novel quickly. I predicted the perpetrator ahead of time, but the journey there was interesting, and full of tension and suspense. Liv is an unreliable narrator, but her search for the truth will have you supporting her and wishing for the best.

In order to enjoy this novel about memory loss you have to suspend disbelief while reading it. Trust me on this one. Next, you have to skip over all the repetitious phrases and whole paragraphs that are used in association with Liv's memory loss. If you can do both of these steps, you are going to enjoy the novel and figuring out the mystery of what really happened and what is going on with Liv. Honestly, there have been better memory loss novel and this one has an uneven start until Liv's history of memory loss was revealed. 3.5 rounded up.


Disclosure: My review copy was courtesy of St. Martin's Press via NetGalley
Posted by Lori L at 1:17 PM