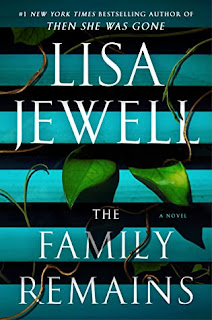 The Family Remains by Lisa Jewell is a very highly recommended psychological thriller and a sequel to The Family Upstairs.

Following multiple storylines in different time periods, the opening of the novel features a cast of characters, which will be very beneficial. In 2019, DCI Samuel Owusu is called out to the shore of the Thames to examine bones that are found washed up on the shore in a trash bag and found by a mudlarker. He calls Rachel Rimmer to inform her that her ex-husband is dead. In 2016, Rachel Gold meets Michael Rimmer and ends up marrying him after a quick courtship which ends with Michael’s murder in the Antibes in 2018. In 2019 Henry Lamb has his sister Lucy and her two children staying with him. Lucy was once married to Michael; and Lucy’s daughter is Libby Jones, whose escape from their childhood “house of horrors” was the centerpiece of the previous book. Henry’s is obsessed with Finn Thomsen, from his traumatic youth and searches for him in Chicago.

On The Family Remains you really need to read The Family Upstairs first. Sometimes it doesn't matter so much but with this sequel it really does, as does the cast of characters at the beginning. Trust me. After that you will realize that this is an amazing sequel full of suspense and mysteries as well as some nail-biting tension. The plot itself is intricate and, again, depends upon you acquaintance with the characters from The Family Upstairs. The story, which jumps around in time and between characters in each chapter, does involve child abuse.

Jewell is an excellent writer and that is evident in The Family Remains. The intricate plot and well developed characters are fully established in the plot through four different narratives. It does take some time to develop connections between the different timelines and stories, but in the end it is worth it. Henry's obsession with Finn is especially intense and chilling.

This is another excellent novel from Jewell, who is quickly becoming a favorite author due to her reliability in writing an exceptional story.

Disclosure: My review copy was courtesy of Atria Books via NetGalley.
Posted by Lori L at 2:21 AM