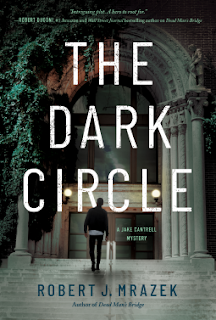 The Dark Circle by Robert J. Mrazek is a highly recommended thriller and the second installment of the Jake Cantrell series.

Jake Cantrell, ex-army officer, loses his job as a campus security guard when a campus event leads to Jake having to defend himself against two football players high on an opioid distributed at the event. He is fired for using excessive force, but quickly finds another job. Lauren Kennsiton, editor of the Groton Journal, hires him to find missing college student Deborah Chapman. Deborah is a gifted young jazz vocalist who suddenly disappeared. Jake's investigation turns into a whole lot more than finding a missing person.

This is a very dark and disturbing thriller. There is one scene very early in the novel that almost had me decline to finish reading it for a review. I hope it was removed from the final version. There was no reason for it to be included and it needs to be noted that women read thrillers too, not just men. What kept me reading was Bug, the eighteen-year-old wolf hound Jake saved in Afghanistan. Jake is very loving to Bug and so I decided to continue. It did get better.

While the tone of the narrative continued to be very dark, Jake's actions and investigation are seriously dedicated to discovering what is going on. The plot becomes increasingly complicated as Jake uncovers more information and clues leading to more and more disturbing facts. Jake's determination to uncover everything is commendable, which sort of made up for the earlier scene. This can be read as a stand-alone novel. I have not read Dead Man's Bridge, the first in the series, and didn't feel as if I missed anything. Events in Jake's past are shared as needed in the plot.

The Dark Circle is a novel that requires you to suspend disbelief as Jake is almost super-human in his ability to handle all sorts of abuse and violence and keep going while trying to track down perpetrators and clues. It is well-written and readers will end up hoping Jake succeeds in all the very risky missions he undertakes to find the answers and uncover the nefarious deeds and actions going on. The final denouement is satisfying, but there are some questions/plot points left unanswered.

Disclosure: My review copy was courtesy of Crooked Lane Books via NetGalley.
Posted by Lori L at 1:52 AM