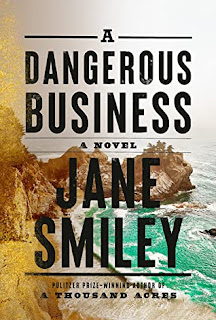 A Dangerous Business by Jane Smiley is a highly recommended historical mystery set in 1850s California.

After Eliza Cargill Ripple’s husband is killed in a bar brawl in Monterey, California, she chooses to work in the well-run brothel of madam Mrs. Parks. Eliza is only 21, but she knows she does not want to go back to her parent's house in Kalamazoo. Work in a brothel provides financial security and allows her to stay in Monterey. Eliza also makes her first real friend, Jean MacPherson, who works in the same profession, but with women. After some working girls are missing and bodies are found outside of town, the two begin to work together investigating who could be targeting and murdering young women as law enforcement isn't interested..

Smiley, as expected, excels at providing descriptions of the setting during the specific time period and furnishing the historical details that bring the narrative to life in this incredibly well-written novel. Eliza's trade is described in a quaint manner, although perhaps too much for the page count, and interesting details about the time period are provided by her clients, many of them sailors. I also appreciate the literary references about novels during the time period included in the plot.

Eliza and Jean are portrayed as realistic and sympathetic characters within the historical time period. Smiley brings them both to life in the narrative as they work together trying to piece together clues and figure out which client could be guilty of the murders. Of course, there are also horses which are all described as unique.

My reticence concerning A Dangerous Business is three fold. The whole plot element involving seeing ghosts and ghosts being sighted almost constantly is suddenly dropped and nothing is done with it. The second is that, no matter how well-written, the pace of the novel is very slow. Finally, the actually denouement was a bit of a let down, as I was anticipating more, which is perhaps my failing, but there it is.

Disclosure: My review copy was courtesy of Knopf Doubleday via NetGalley.
Posted by Lori L at 3:43 PM