Empire of Ice and Stone

Empire of Ice and Stone: The Disastrous and Heroic Voyage of the Karluk by Buddy Levy
12/6/22; 432 pages
St. Martin's Publishing Group 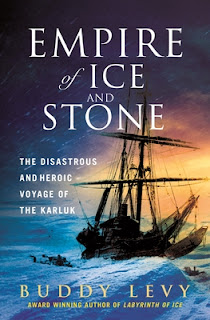 Empire of Ice and Stone: The Disastrous and Heroic Voyage of the Karluk by Buddy Levy is the very highly recommended true story of the 1913 Canadian Arctic Expedition.

When the Karluk departed Canada for the Arctic Ocean, Captain Bob Bartlett was at the helm and Vilhjalmur Stefansson was the leader of the expedition. The expedition set out in June and by early August the Karluk was icebound. Stefansson headed off with five men on a hunting trip and never returned, choosing to head for land and continue the expedition on his own. This left Bartlett in charge of the survivors. When the ship was crushed by the ice, they trekked 50 miles across the ice pack to Wrangel Island. Then Bartlett and an Inuit hunter set out on a 1,000 miles hike to Alaska to summon help to rescue the survivors.

Empire of Ice and Stone reads like a thriller. It is a fascinating, terrifying, and un-put-downable account of a polar expedition gone terribly wrong. Levy takes the facts and uses them to portray these people as real individuals facing a harrowing, impossible situation where a good outcome seems highly unlikely. He also clearly portrays the two different paths taken by Stefansson and Bartlett, with most of the focus on the crew trying to survive. Bartlett is legitimately the hero of this frightening true story.

Anyone who enjoys reading about Arctic expeditions will want to add Empire of Ice and Stone to their list of must read nonfiction. Included at the end is an extensive list of documents, collections, websites, etc. in a selected bibliography that showcases the research that went into writing this account. This is an excellent, well-researched book and one of the best nonfiction books of the year.

Disclosure: My review copy was courtesy of St. Martin's Press via NetGalley.
Posted by Lori L at 9:22 PM