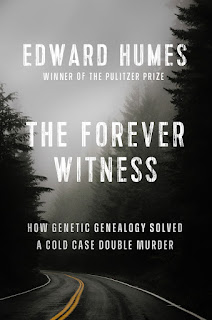 The Forever Witness: How DNA and Genealogy Solved a Cold Case Double Murder by Edward Humes is a very highly recommended true crime account that reads like a novel. This investigative novel introduces the 1987 cold case of victims 18-year-old Tanya Van Cuylenborg and 20-year-old Jay Cook and then explains how the case was solved thirty-one years later by investigator Jim Scharf and genetic genealogist CeCe Moore.

Canadian citizens Tanya and Jay were taking an overnight trip from Vancouver to Seattle, Washington, to purchase some furnace equipment for Jay's father. The young couple never made it home and their bodies were found in separate locations in rural Washington. There were few clues and no witnesses, so the case went cold and the biological evidence from the crime was frozen.

Thirty-one years later Detective Jim Scharf is examining cold case files, looking for clues. Scharf decided to take a chance and work with CeCe Moore. Moore with her interest in genetic genealogy has been looking at the information from home DNA ancestry kits being used as a forensic tool. It is through the test that a link to familial DNA points out a suspect, Bill Talbott, a 55-year-old Seattle trucker.

This is a well-written and well-paced true crime story that follows the facts of the case and how a suspect was found and reads like a novel. Humes does an excellent job introducing us to the victims, the detectives working the case and later the cold case. There is an accessible discussion covering the advances of DNA research, the science behind it, and explaining the creation of GEDmatch, the DNA database that genetic genealogists and law enforcement use to solve cold cases. There is also a thoughtful discussion involving the pros and con of using genetic genealogy. Included at the end are notes for Humes research.

Disclosure: My review copy was courtesy of Penguin Random House via NetGalley.
Posted by Lori L at 11:45 AM