A Rattle of Bones 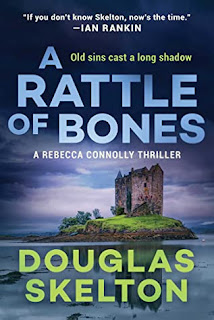 A Rattle of Bones by Douglas Skelton is a highly recommended third Rebecca Connolly thriller.

Rebecca Connolly is sure there is a story when banners proclaiming the innocence of convicted murderer James Stewart are placed by the grave site of his namesake. Stewart has been in prison for ten years, so why the sudden interest in his case? Rebecca decides to look into the case and talks to Stewart's mother, Afua. Rebecca isn't the only person interested in the banners, the case, and in Rebecca's investigation, and they don't want her pursuing the story.

Although this is the third book in the series, you can read it as a stand alone and still appreciate it. All of the characters, both protagonists and antagonists, are fully realized individuals and the whole cast of characters is well integrated into the complex plot. The Scottish Highlands themselves are a character, both harsh and beautiful, and they play a role in the atmosphere created.

The writing is quite good and the plot is intricate and involved in this slow-burning atmospheric thriller. There are plenty of revelations and twists as the narrative unfolds. The tension runs high as the many different story lines come together to create a complete picture of the complicated plot. The ending is surprising and the whole novel was very satisfying.

Disclosure: My review copy was courtesy of Simon & Schuster.
Posted by Lori L at 1:23 AM