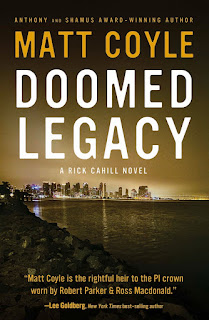 Doomed Legacy by Matt Coyle is a very highly recommended crime novel and the ninth in the series featuring private investigator Rick Cahill. This is another outstanding addition to the series.

Rick Cahill has been trying to take things easy these days and focus on background checks for businesses. His CTE (Chronic Traumatic Encephalopathy) is progressing and he is having a new symptom that he is scared to share with Leah, his wife. He and Leah now have a fourteen month old daughter, Krista, and they are living in San Diego, California. At the last minute an incident has Leah taking Krista up to Santa Barbara. This same day, a distraught Rick receives a phone call from Sara Bhandari. Sara is with the human resources at Fulcrum Security and Rick conducts background checks on potential employees for the business. Sara wants to meet him in an out of the way place to discuss some irregularities which concern her.

The next thing Rick knows Sara is found murdered. The police think it is the work of a serial rapist, but Rick thinks there is something, or someone, else responsible. Although he had promised his wife to avoid risking his life to pursue the truth and justice, he begins to investigate Sara's death. His quest starts with a shady PI agency and proceeds to uncover deeper, more sinister secrets.

It is always thrilling to read a Rick Cahill novel. For fans, Rick is a known, fully realized character. His is flawed, compassionate, principled, intelligent, and observant. He experiences growth and challenges in the novel while following the clues in his investigation and his conscience.

This is an excellent addition to the series. The riveting, complex novel is very tightly plotted and fast-paced. The new revelations and discoveries Rick uncovers will keep readers engrossed in the narrative. Doomed Legacy is the ninth novel in this outstanding series. Although the novels can be read as a stand-alone since any needed background information is provided in the context of the plot, the order of the series is: Yesterday’s Echo, Night Tremors, Dark, Blood Truth, Wrong Light, Lost Tomorrows, Blind Vigil, Last Redemption, and Doomed Legacy.

Disclosure: My review copy was courtesy of Oceanview Publishing.