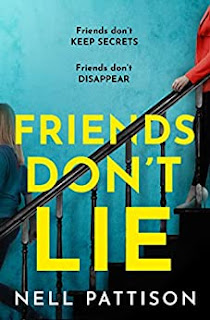 Izzy (Isabella Butterworth), who works from home, received a few emails that were meant for another woman with the exact same name as her. After a man accosts her outside her home, wondering where Bella was, she begins to look into the other woman's life to try to meet her. Bella Butterworth leads a much more exciting life than Izzy so Izzy begins to obsess over her and finds ways to insert herself into Bella's life, perhaps to warn her that she might be in danger, but under a false name. The two do become friends, but so many questions remain and nothing is exactly as it seems.

The opening to Friends Don't Lie moves at an even, slow pace, however, you will be drawn into the plot. The narrative is told through the points-of-view of different characters, which helps develop them as individuals. None of the characters are particularly likable, but the fact that one character is eventually really stalking another character will grab your attention and hold it while things get switched up in the plot. And the lies, there are most certainly lies and subterfuge in the narrative. There will be a point where you will say "What?" and doubt what you've reading, but the twist will sort itself out.

The plot is really rather pedestrian for most of the novel until the twists which occur later. You will be expecting some twist, however, so when it finally happens most readers will be prepared to figure it out even though it is confusing at first. The second twist then becomes a predicted one. Friends Don't Lie is an entertaining novel. 3.5 rounded up

Disclosure: My review copy was courtesy of HarperCollins via NetGalley.
Posted by Lori L at 5:34 PM