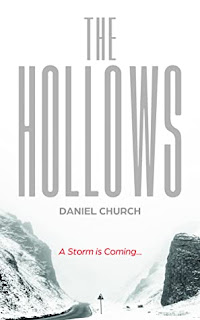 The Hollows by Daniel Church is a recommended folk horror novel.

In the Peak District an intense snow storm is about to hit when Constable Ellie Cheetham responds to a call about a body being found. It appears the man froze to death, but there are clues that point to his death being something else and that he his death was watched. Then the storm hits the village and the next victims are two families on the outskirts of town. Ellie soon realizes that something is killing people under the cover of darkness and the storm, and what ever it is, it is moving in closer to the village.

The writing is good, but the novel is over-written. After a strong, riveting start full of suspense and trepidation, the narrative then began to drag on a bit, drawing the story out longer than was perhaps a prudent choice. It would have benefited the overall plot to tighten up the writing and keep the focus on the action. However, many readers will be able to push past this as the ancient creatures are creepy, their actions are frightening, and the battle between good and evil is fought on several different levels.

There perhaps should be a language warning for a portion of the prospective readers. Some will be able to simple put it in context and read on, but there is a lot of usage of certain objectionable words that others may find unpleasant. The length slowed the pace down a bit too much for me. 3.5 rounded down

Disclosure: My review copy was courtesy of Angry Robot via NetGalley.
Posted by Lori L at 1:18 AM