All the Dangerous Things

All the Dangerous Things by Stacy Willingham
1/10/23; 336 pages
Minotaur Books 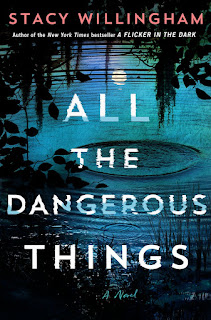 Isabelle Drake's 18 -month-old son, Mason, was abducted from his crib in the middle of the night while she and her husband, Ben, were asleep. It has now been a whole year and the case is going cold and Ben and Isabelle are estranged. With the exception of catnaps or small blackouts, it has also been a sleepless year for Isabelle.

Her entire life and focus is on uncovering a clue to her son's case and finding Mason. She has even told her story at true-crime conventions, hoping for a lead. When Waylon Spencer offers to feature her story on his true-crime podcast, she isn't initially interested, but then she changes her mind, hoping his listeners might have information about Mason.

The narrative is told through Isabelle's point-of-view in two timelines, 1999 when she was a child, and the present day. The atmosphere is somber and bleak in both timelines. She is a flawed, unreliable narrator due to her lack of sleep. The pace is very slow in the first third of the novel, which focuses on establishing Isabelle's extreme lack of sleep, her desperate attempts to find leads on Mason disappearance, and begin the story of her childhood.

Admittedly, I set the novel aside twice at the beginning due to the slow pace, the repetitive focus on Isabelle's sleep deprivation, and the overly verbose descriptions. Once some kind of action picks up as she begins to talk to Waylon and more of her childhood is revealed, the novel becomes much more intriguing and the tension begins to rise.

Clearly, there are more mysteries to solve than just Mason's abduction. The narrative introduces a couple surprising twists, one of which certainly requires suspension of disbelief. (The police investigation would have uncovered clues to this.) You might think you have it all figured out, but the twists will surprise you.

Disclosure: My review copy was courtesy of Minotaur Books via NetGalley.
Posted by Lori L at 2:46 PM