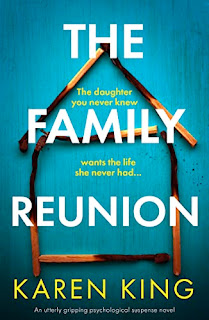 The Family Reunion by Karen King is a highly recommended domestic drama.

Mary's husband Paul passed away after 38 years of marriage and she misses him every day, but she also never told him her guilty, shameful secret. When she was barely 16 she gave birth to a daughter she named Hope. Knowing her father would never permit her to keep the baby, she gave birth alone and then abandoned Hope wrapped in a yellow blanket with a note. She hid nearby to make sure Hope was quickly found, but has regretted her decision for 45 years. Now she has decided to find Hope and introduce her to her two children with Paul, Joanne and Jason.

When she actually finds Hope, the two confirm they are related through a DNA test. Mary learns her first born daughter's name is Cathy and the two immediately begin to form a relationship. Mary is thrilled to share time with her oldest daughter and hopes Joanne and Jason will accept her. When they all meet, however, the tension is palpable. It seems that Joanne and Jason are concerned that Cathy's motives for the relationship may be to take advantage of Mary financially. And then strange things begin to happen...

After a very intriguing opening which foreshadows problems to come, the pace of The Family Reunion slows down while setting all the pieces of the plot into place. The direction the plot takes will increasingly hold your attention after every chapter. The narrative is told through the points-of-view of Mary, Cathy, and Alison, Jason's wife. Joanne and Jason are truly disagreeable characters. At time you will fear that Mary is too trusting and naive. Cathy seems sincere and helpful, but we also know that she has a few secrets of her own.

King does a commendable job placing suspicion on everyone as well as throwing a few red herrings into the plot to keep you guessing. There is a whole lot of secrets, deception, gaslighting going on in the plot, which does make the story compelling. And then, of course, the foreshadowing in the opening of a dark turn in the plot will keep you reading to see who this man is and why he was after Mary. There are several shocking twists and turns in the narrative, but the twist at the ending is totally unpredictable and surprising.

Disclosure: My review copy was courtesy of Bookouture via NetGalley.
Posted by Lori L at 3:52 PM