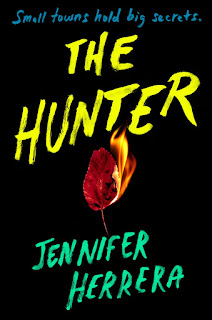 The Hunter by Jennifer Herrera is a highly recommended debut investigative novel of suspense.

Leigh O’Donnell, former NYPD detective, has lost her job due to a poor choice. Her husband, NYPD Police Captain Eric Walker and commanding officer, was the one who had to suspend her and then the two separated. When her brother Ronan calls and tells Leigh she has a job at the Copper Falls, Ohio, Police Department, she resists until he admits three dead bodies have been found. Now she is taking her four-year-old daughter Simone to Copper Falls, her hometown, where her brother and three uncles live. The town may look picture perfect, but there is something that has been amiss there for years and some of the towns darkest secrets are about to be exposed.

While it is an investigative novel, The Hunter in many ways is more an atmospheric in-depth character study. The good news is that Leigh is an interesting, complicated character to study. She has been away from the town for a decade. Even when she is investigating the deaths of the three men, she is also dealing with complicated memories and emotions. Her interactions with the world around her are very sensory and unique. She is a character that is full of pain due to trauma from her childhood, but also a result of more recent events.  And she is a devoted, loving mother and a doggedly determined investigator.

The actual murder investigation is very interesting and compelling due to the questions that arise in this even paced novel. The investigation follows several varied directions and borders on the supernatural at times. Leigh retains her interest as a character, which keeps things rolling along while there are plenty of questions and suppositions to keep interest high. The family drama intertwined in the plot adds a different dimension to the investigation. In some ways there were a few too many extraneous story lines that could have been eliminated.

The writing is quite good. It will be interesting to see the next novel Herrera writes and see if it is more a character study or procedural.


Disclosure: My review copy was courtesy of Putnam via NetGalley.
Posted by Lori L at 12:33 AM