The Cabinet of Dr. Leng 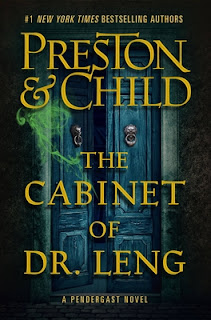 The Cabinet of Dr. Leng by Douglas Preston, Lincoln Child is a highly recommended procedural, and science fiction thriller, and the 21st Aloysius Pendergast novel. As a long time fan of both Preston and Child, together and separate, I need to forewarn other fans that this novel is TO BE CONTINUED...a situation that has left me distressed and a tad bit frantic.

The novel follows three different narratives. First, FBI agent Pendergast is devastated that his ward (and love) Constance Greene has left him. Constance has used a time machine to travel back to a parallel universe in New York City in 1880. She is hoping to right several wrongs, save her siblings, and make the scurrilous Dr. Leng pay for his devious deeds. Pendergast plans to go back in time to save her.

Then, Special Agent Armstrong Coldmoon who has been working with Pendergast, is sent to investigate a murder on the reservation in South Dakota. And New York City, Lieutenant Commander Vincent D'Agosta is investigating the unusual murder of the curator of Native American artifacts at New York's Museum of Natural History. It is soon discovered that Coldmoon's case is related to D'Agosta's case.

The pace moves briskly in all the narrative threads and the intrigue just keep building with each new chapter. The dual timelines and cases are all correspondingly compelling, challenging, and intricate in all theories/investigations/mysteries, enough so that you will be equally interested in all the plot lines. As the chapters switch between storylines, knowing the other storylines will be updated in subsequent chapters, the new information will be welcomed.

As you reach later points in the novel, you will be wondering how in the world case Preston and Child reach a conclusion and tie up all the loose ends. Then you will find out that the novel is too be continued. sigh. The fact is that the wait will be worth it because the narrative threads are already so strong and the action so engrossing that to expand it into another novel to reach a conclusion will only result in a more riveting story and a consummate summation of all the narratives. Preston and Child are talented enough to pull it all together.

At this point all the characters are well-developed because they have been around for years. They are all complex and fully realized individuals and this novel continues adding depth to the characters. Coldmoon is a new character, as far as the series goes, but he is also well-written and realistic.

Fans of the series are going to jump on this latest novel immediately. Newcomers could start here, but it would make more sense to read the series in order. The procedural part of the novel can stand alone as a separate story, but the whole plot involving Constance and Pendergast benefits from the background information.

Disclosure: My review copy was courtesy of Grand Central Publishing via NetGalley.
Posted by Lori L at 12:06 PM