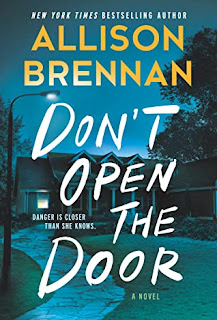 Don't Open the Door by Allison Brennan is a very highly recommended mystery/thriller/procedural and the second book in the series featuring Regan Merritt.

Regan Merritt has left the US Marshals and her ex-husband, Grant after the murder of their ten-year-old son, Chase, and moved to Arizona. When her former boss, US Marshal Tommy Granger, is shot and killed after contacting her claiming he had new information about Chase’s murder, Regan returns to Virginia. She plans to investigate what happened to Tommy and what new information he had uncovered in his investigation into Chase's murder. As Regan begins to look into what happened and tries to meet with Grant, it becomes clear quite quickly that there is a whole lot more going on and someone wants to stop any questions or additional investigations into.

Don't Open the Door  is a wonderfully written complicated mystery/thriller/ procedural that will quickly pull you into the plot and hold your attention throughout. Although it is the second novel featuring Regan Merritt, the first is The Sorority Murder, I feel that it can work as a standalone. There is enough background information to bring readers up to speed quickly. (You might want to read it, however, because it is a very good novel.)

Regan is a fully realized character and you will support her in her search for truth and justice. It is unimaginable to have to deal with the murder of a child, but as Regan discovers more information and it seems that there are insiders involved, she isn't sure who she can trust. Her level-headed reaction to information is a perfect character trait. The FBI's involvement makes it worse and more complicated. There are numerous characters but they are all easy to keep track of within the context of the narrative.

The pace is quick throughout with short chapters to keep things moving as the twists keep coming in the developing investigation. The plot is riveting; full of twists, danger, suspense, and surprising information. Regan is a great character as she takes information in and processes what it means. Don't Open the Door is a novel you won't want to miss.

Disclosure: My review copy was courtesy of MIRA.
Posted by Lori L at 2:32 AM