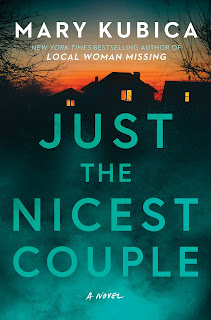 Just the Nicest Couple by Mary Kubica is a recommended domestic thriller.

Lily Scott is pregnant and she and Christian, her husband are thrilled but keeping it a secret due to her past miscarriages. Through the high school where she works with Nina, they have become friends with another couple, Nina and Dr. Jack Hayes. When Jack doesn't come home one night and then it becomes clear that he is missing after two days, Nina shares her concerns with Lily. Lily has some bigger concerns, which she shares with Christian. She knows why Jack might be missing and thinks she might be responsible.

Once the premise is set into place after a strong opening, the pace becomes rather lethargic in this novel, which is uncharacteristic of a novel by Kubica. It will keep you entertained. Things are done, subterfuge occurs, and events happen, all of which keep the narrative moving, but even when you know there could be some serious consequences for actions taken, nothing feels that serious. It is a quick read and there is a surprising twist at the end.

Perhaps the hesitation over this novel is the characters which never felt fully realized to me. It could also be in the writing style used in this novel - a lot of short brief sentences with repetition of the same information. Just the Nicest Couple isn't a bad novel, I would certainly still recommend it, but Kubica has written better novels. Fans who follow her work will want to read this one anyway.

Disclosure: My review copy was courtesy of Park Row Books.
Posted by Lori L at 12:27 PM